If you just can't wait, or you like to pick and choose your stories, I'm making it easy for you.  I'm releasing five of Blood Addict's eight stories as ebooks.

But it's up to you.  You've got choice, people!  You can read what you want.  Like "Beneath the Ice," first published by the now defunct loveyoudivine Alterotica, now reissued at the insistence of one very persistent reader: 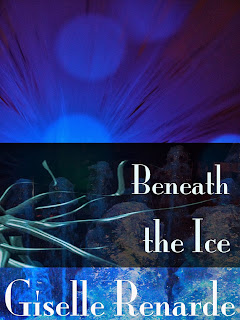 
The sea monster Kaloopalooit lives in the cracks of ocean ice, devouring the children of the Arctic.

When Enooya bets her husband she's a better fisher than he is, she sets off unperturbed to the fissures in the sea ice. After all, the Kaloopalooit is just an imaginary monster the elders dreamed up to scare kids.

Enooya discovers just how real the Kaloopalooit is when it drags her into the icy water. The sea monster is beautiful and horrible, shimmering and bizarre. In exchange for breath, it demands that Enooya secure children for its dinner. Enooya has a better idea: Why not sample the delicacy called woman?

A creature burst from the giant hole, dreadful and beautiful. Its glistening scales shone so brilliantly Enooya had to shield her eyes. Its flesh glittered like fields of diamonds, gleaming with every shade of the ocean. It was blue as the blue whale, green as algae, turquoise as the southern coasts, and as silver as the Arctic char.

Before Enooya could make out anything beyond its dazzling colour, a slick tail coiled around her ankles. Her knees knocked together with a bony bang, sending streaks of pain down her legs. The coil tightened, slithering up her thighs, around the corpulence of her ass, slippery and smooth around her waist. She fell limp under the creature’s stranglehold. Her eyes shut. Her head tilted to one side, too heavy to hold upright.

The monstrous thing tugged so hard Enooya fell back with a thud. Her shoulder blades smacked the sea ice, making her ribs rattle.  Her skull met the surface, and for a moment, everything went black.

Enooya didn’t struggle, even when the evil creature dragged her feet-first into the frigid ocean.  It tugged her body toward the fissure, and there wasn’t a thing she could do to escape. It had her in its power.

or
All Romance: https://www.allromanceebooks.com/product-beneaththeice-1317450-143.html
or
Smashwords: https://www.smashwords.com/books/view/362688
or
Coffee Time Romance: http://www.coffeetimeromance.com/BookStore/pubs_product_book_info/indie-authors-giselle-renarde-c-193/beneath-the-ice-p-11044

Coming soon to other retailers!

And keep an eye on Donuts and Desires all week, because I'll be featuring more ebooks from the "Paranormal Erotic Shorts" series!
***
Giselle Renarde is a queer Canadian, avid volunteer, and contributor to more than 100 short story anthologies, including Best Women’s Erotica, Best Lesbian Erotica, Best Bondage Erotica, and Best Lesbian Romance. Ms Renarde has written dozens of juicy books, including Anonymous, Ondine, and Nanny State. Her book The Red Satin Collection won Best Transgender Romance in the 2012 Rainbow Awards. Giselle lives across from a park with two bilingual cats who sleep on her head.
Posted by Giselle Renarde at 8:06 PM