Hi Giselle and hi to all your readers,

I'm so thrilled to have arrived in Canada with my troupe of travelling zombies—and to be here on Giselle's blog, particularly when I know how terrified of zombies she is.  Don't worry, Giselle, I've chained them in the corner and I'm throwing your donuts at them! 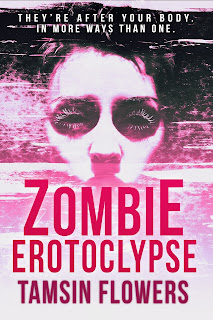 Now, down to business. The reason we're here is to tell you about my new short story collection, Zombie Erotoclypse, a hot and steamy concoction of zombie erotica in which the walking dead have designs on your body rather than your brain!

Here's the blurb: If you're missing The Walking Dead, if you're the slightest bit fond of zombies or if you think they're smarter than we give them credit for, this is the book for you - in Zombie Erotoclypse the zombies have one thing on their mind and it ain't about eating your brain!

Have you ever wondered whether zombies have sex? Fall in love? Lust after humans? The five stories in this red hot collection of zombie erotica will answer all these questions and more. If you thought it was tough being a teenage virgin, try it zombie style or why not take a visit to the club where humans get to have their wicked way with hot young zombies - for a price... Meet the Peeping Zom, who develops an obsession with a hot human blonde. Who looks after new zombies and teaches them the art of zombie love-making? And how would you react if the love of your life came home one evening with a zombie bite?

There are five stories in total and today's excerpt is from the first story, Red Hot Zombie Cock…

Marsha has enough to contend with - a whole city full of zombies at the end of the pier where she's taken refuge - without having to put up with the antics of her cousin Skylar. So when he persuades her to visit a zombie sex club to celebrate her birthday, she knows from the get go it's a bad idea.

Mack steps forward and from where we're standing, slightly to one side, I can see that he's rubbing against the groin of his jeans with one hand.  I can hardly believe what I'm watching and I almost forget to breath.  After a couple of thrusts against his hand, the boy unzips his pants and wrestles his cock out through the slit, tangling with it until it's standing proud outside the denim.  He makes a half turn to let the crowd see his impressive erection, a wide grin on his face.

"Jesus," I say and Skylar puts an arm round my waist.  I'm not sure I want to see this.

The kid turns back to the cross and puts a hand out to touch the zombie.  He brushes it, quite softly it looks, across her breasts, making the zombie grunt and strain against her restraints.  The grin has gone from his face and he looks completely fascinated.  He runs his fingers down her torso, slowly, exploring the texture of her rough, grey skin.  Under his touch, she bucks and the grunt becomes a moan that steadily increases in volume the further down he ventures.  On the next cross, the male zombie seems to sense what's happening and starts baying as he, too, struggles to get free.

"Apparently zombies have an epic sex drive," whispers Skylar in my ear and I feel his hot breath on my neck.

Mack spits on his index and middle finger and pushes them down between the zombie's splayed legs.  It has an instantaneous effect, as if a jolt of electricity has been passed through her body.   Her back arches and her head whips from side to side as she releases full-blooded zombie scream.  In the enclosed space, it tears the air and reverberates in ears and chests.  Mack looks back over the shoulder at the baying audience, his grin back in place.  Then he takes his cock in one hand and uses his other hand to find a pathway into the zombie's pussy.  He strokes his swollen head up and down between her lips and then I see his hips surge forward as he pushes himself inside.  She screams again and the male zombie roars with her.  When I look at him, I realize his cock's even larger now and he's pulling harder against the bindings at his wrists and ankles.

The crowd goes wild with catcalls and whistles as Mack pumps in and out of her.  And despite my revulsion for what I'm seeing, I realize that between my legs I'm wet.  Skylar pulls me back against his body and I can hear that his breathing has quickened.  He grinds his hips against my ass and I feel the bulge of a nascent erection.

To find out whom else the zombies will be visiting over the next month check out the schedule on Tamsin's Superotica.

Author bio: Tamsin Flowers
Tamsin Flowers loves to write light-hearted erotica, often with a twist in the tail/tale and a sense of fun.  In the words of one reviewer, 'Ms Flowers has a way of describing sexual tension that forces itself upon your own body.' Her stories have appeared in a wide variety of anthologies and she is now graduating to novellas with the intention to pen her magnum opus in the very near future.  In the meantime, like most erotica writers, she finds herself working on at least ten stories at once: while she figures out whose leg belongs in which story, you can find out more about her at Tamsin's Superotica or Tamsin Flowers. Follow her on Twitter @TamsinFlowers or on Facebook Tamsin Flowers.

Posted by Giselle Renarde at 1:30 AM