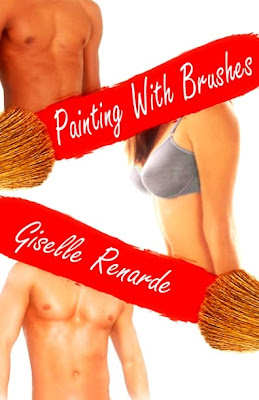 Claudia knew the truth. She’d always sensed it, but now she knew for certain. “You were in our bedroom when Jason Paul was still my husband.” It wasn’t a question, it was a statement. Certainly it was true.

In Mark's silence, she waited for tears, but they didn’t come. She didn’t have it in her to be upset with them any longer. When she pictured Mark and her husband in bed together, the image made her tingle. “You made love to him in our bed, didn’t you?” One man and another man, their bodies writhing together…rough sex...tender kisses…

“When you were away,” Mark admitted. He didn’t stop painting to confess. “You visited your mother the summer Jason Paul and I first met. We lived in your bed that entire week.”

She nodded. Where had her anger gone? She felt none of it. In fact, when she reflected on the two men falling in love and into bed, it seemed romantic. She had the choice to play a bit part in their love story, or to play the evil witch. Why had she chosen the latter? Why had she made their love more difficult than it had to be? Simple enough, she thought: Jason Paul was her husband. Of course she felt possessive of him—she was in love with him too!

Was it possible to love selflessly, she wondered? One could love one’s children and one’s parents without ego interference. Yes, it was very possible to love two people at once. But being in love was different. In love, she’d been jealous and controlling. It didn’t seem like too much to ask, at the time, that her husband not sleep with other people. Love was such a crazy animal. Uncontrollable.

“I had a feeling you did,” she said. “Something about the sheets. They seemed more tousled than usual.”

“We had sex up against the washing machine,” he reflected. The early days of any affair were always halcyon. Mark shook his head, staring at the wall. “Sorry. I’m sure you didn’t need to know that.”

“I don’t mind.” Claudia actually smiled when she pictured them together. And then she surprised herself by saying, “Tell me about it.”

You can check out this and other Upcoming Amber Heat titles here: http://www.amberquill.com/AmberHeat/AH_upcoming.html
Posted by Giselle Renarde at 8:52 AM