Another book from the Bi-Line at loveyoudivine! See that tagline? "It's not cool to be a gay or bi cop in 1977"--intriguing, right? 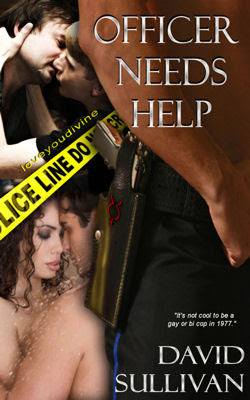 Title: Officer Needs Help
Author: D. Sullivan
Blurb: Sean Patton is a pacifist who doesn’t like guns but knows that statistically few law enforcement officers ever shoot anyone, so he plays the odds and loses. When a wife beater shoots him on a domestic-violence call, Sean is forced to shoot back. While his bulletproof vest saved Sean, it couldn’t shield him from the posttraumatic stress. His hidden bisexuality raises the stakes to risk his career and mental stability. As far as women go, he’s committed to being loyal to his loving and supportive girlfriend, Debbie. But can he swear off men? He’s knows the drive is inborn. How can he tell Debbie about his other side and still keep her? You'll feel the heat when Sean makes love to his gay friend from college and later with his lawyer girlfriend in the shower. A tryst with his male supervisor furthers the adventures.
Buy Link: http://www.loveyoudivine.com/index.php?main_page=document_product_info&cPath=72&products_id=611&zenid=062ad147a09b3c18845cbed3b7e96a19
Posted by Giselle Renarde at 9:27 AM