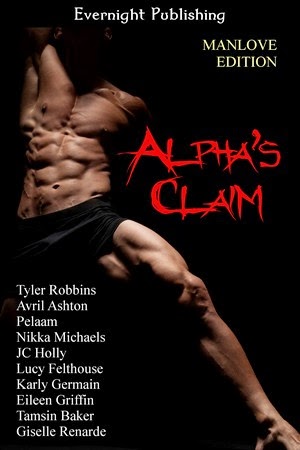 Evernight Publishing has a new release that's bound to be a bestseller!

My story BE THE BOSS is about a gay couple. They've been living together for 7 years and things are getting a little... well, you know.  They're in couples' counseling, but it's not really happening. Both guys want someone to take charge, but neither is comfortable in that role. One night, when they get home from their therapist's office, there's a raccoon tearing through their garbage...

Have you ever read about a story about a raccoon shifter?  No?  Well, then you'd better grab a copy of:

The shifters in our Alpha's Claim: Manlove Edition anthology have one thing in common—they won't take “no” for an answer. Whether they lead packs of their own, or whether they walk a solitary path, these alphas won't let anyone stop them from claiming their men.

Lose yourself in these ten sinfully delicious love stories. After all, who could deny an Alpha’s claim?

http://www.evernightpublishing.com/alphas-claim-manlove-edition/
Posted by Giselle Renarde at 2:20 AM