If you picked up a copy of Best Women's Erotica back in 2011, you'll be familiar with my newest release, Rainbow Night.  If you haven't read it and you're in the mood for a short story about swinging socialites, here it is! 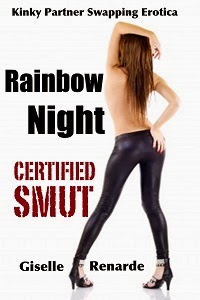 When three couples gather for cocktails on the evening of Elliot and Adele's anniversary, the conversation gets stuck in boring mode. To liven things up, Adele mentions a report she's seen about "rainbow parties," where the girls go down on the guys wearing different shades of lipstick. Once she’s explained the concept to her husband and their friends, the idea of swapping partners becomes much more interesting than the stock market.

“Let’s play a game!” Adele raised her brandy as she rose from her Art Shoppe chair.

Again, she caught nobody’s attention but Sissy’s. “What sort of game?”

Sissy didn’t even reply before turning her gaze in Elliot’s direction.  He went on and on about Dubai. If only she read newspapers or had something insightful to contribute. It didn’t even have to be news, just some piece of information that would capture everybody’s imagination.

“You know what I heard?” Adele asked, loudly enough to draw everybody’s attention. “I saw a report on the television… it’s really quite shameful, you know… it was about these parties teens are having… rainbow parties, I think they’re called...”

Coming soon to Amazon and Kobo (maybe--Kobo's been blocking a lot of my uploads again, so we'll see...)

Hugs,
Giselle
Posted by Giselle Renarde at 1:43 AM