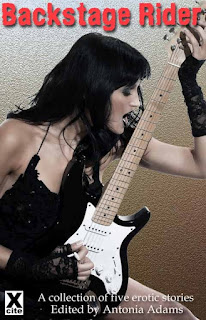 Twenty years ago Clemmy was the hot guitar-playing chick who fronted her own band. Now those days are a memory, as she teaches plank-spanking would-be rock stars how to play. Then 19-year-old Scotty, her best pupil, puts her on the guest list for his band’s first big gig, where they cover one of her famous numbers. Afterwards Clemmy goes backstage where she shows Scotty how real rock stars party …

When Judy brings Alyssa home from a lesbian club, the last thing she expects to find in her very own living room is a young guy, Tipton, kneeling between her husband’s legs. Yes, Judy and Cliff are separated. Yes, there’s no reason why he shouldn’t involve himself with another person. Even so, the unexpected sight gets Judy rather more riled up than she’d like. She isn’t jealous, is she? No, of course not, and to prove it, she’ll seduce Alyssa right in front Tipton and Cliff.

Deborah has a fancy for an older man – and is furious when he snubs her, saying she is too young for him. She is determined to have him and the chase begins – and the lessons she’ll learn before it concludes will have a sting in the tail…

Britta is 34, and has everything – or so it seems. Living in loveless luxury, she is tormented by her husband’s cheating ways. Then she attracts the attention of Colton, a 19-year-old parking valet. Will she resist temptation or embrace it?

These stories also appear in Cougars and Jackals published by Xcite Books.