The City Sucked My Soul (and authors gave it back) 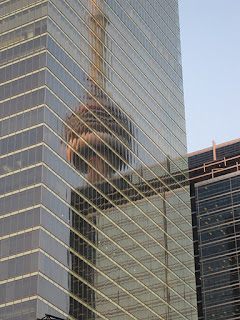 I've written on many occasions about how becoming an author made me a better person.  To recap, once upon a time I worked in business.  I had an office job.  I was promoted too fast for my own good (or anybody else's, for that matter) and by my late twenties had far more responsibility than I wanted or deserved.

It was a weird time.  I wasn't happy and I wasn't nice.  Those who have known me all my life would  tell you I've always had a brusque personality (can you believe it?), but working downtown and dealing with asshole clients brought out the worst in me.

Thankfully, my company's Toronto office was closed down by our American Overlords (all hail!) and I was out of a job.  That was another weird time, because my bosses wanted to "sell" me (in a political sense) to colleagues or competitors at other organizations.  "Just MEET with him, meet with her, see what they've got to offer."

But nobody in business could buy me back that slice of soul I'd abandoned to the city. Only the writing community could do that.

Just yesterday, I realized how huge a role "the city" played in my soul-sucking.  I'd blamed business, work, clients, but they were only a piece of the puzzle.  The city is the landscape of soul-sucking. 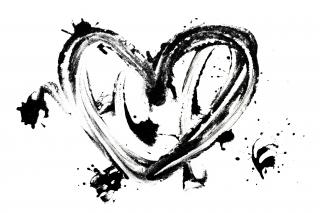 I walk a lot, largely because I don't have a car and public transit brings out my ragefulness if I'm not having a particularly zen day.  So I walk, far and wide.  But I usually avoid Yonge Street.

Yonge is a main street here in Toronto that runs North/South, pretty much dividing the city in two.  It spans the entire length of Toronto and then some.  It's a really long road, and it's many things to many people.  Mid-town it's swanky, uptown it's "Young and Eligible" (a play on the intersection Yonge and Eglinton, where the single yuppies live), but right downtown it's scuzz.

Yes, it's tourist central--this is where the Eaton's Centre is located--but that doesn't reduce the Jerry Springerness of the area.  Actually, I don't want to get snarky because I'm talking about serious issues here.  During my walk to BuskerFest (North America's largest festival of busking), I encountered so much homelessness and mental illness on the city streets that I wondered how I used to navigate these paths every day without my heart tearing in half.

When I began writing professionally, everybody in the industry was so NICE to me.  I couldn't believe it.  Other authors were helpful, and their pleasant encouragement touched me, right to my very heart.  They made me want to be kind to other people, not just authors, but real people I see every day.  I started looking homeless people in the eye instead ignoring them, acknowledging their personhood and existence.  It started hurting my heart when I saw other people doing what I used to do, just walking by, tuning it out.

Yesterday, there was a momentary shift in me.  Yonge Street did the trick.  The poverty and illness (and fervent religiosity) overwhelmed me to the point where I slipped back into that zone other urbanites have no doubt lived in: you stop seeing people, stop hearing their pleas.  They stop existing.  It's a protective place.

I'd like to think our hearts can only handle so much sorrow, but it has to do with noise as well.  At Yonge and College, I had 3 dudes with leaflets telling me I was going to hell while and elderly woman asked me for change.  All at the same time.  When 4 different people are all at you for something, it's hard not to shut down, especially when you know you're going to take 2 steps forward and the same thing's going to happen all over again.

I shut down yesterday.  I stopped seeing human suffering, stopped acknowledging human beings.  I think it was only a temporary measure on the part of my psyche, but I understand now how I managed to shut down (emotionally) so completely when I worked in that environment every day.

I don't know how many of you are country mice and how many are city mice, but I'd love to hear your perspectives.  I'd especially love to hear comments from people who grew up in smaller communities, about their experiences with large urban centres.

Thanks for being my stand-in therapists, everybody.
Have a great Monday.
Hugs,
Giselle
Posted by Giselle Renarde at 1:31 PM