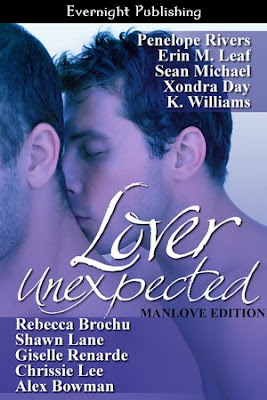 I'm not exactly known for my gay fiction, but after the success of Wedding Heat: Skinny Dipping (and, more recently, Wedding Heat: Hole In One), I wanted to write more.  So I wrote up a story called "Gypsy Psychics Can't Be Wrong" and submitted it to this anthology from Evernight Publishing called Lover Unexpected: Manlove Edition.  Lucky me--my story was selected!

This anthology really appealed to me because the concept behind it was friends becoming lovers.  That gets me every time.  I love that sort of plotline, so my story is about a guy, Marty, who can't see what's right in front of him: his coworker Cameron, who is always there... especially when Marty's beloved grandmother dies and he needs a shoulder to cry on.


Marty's more than a little surprised when the gypsy psychic who hangs out between the liquor store and flower shop says that somebody loves him.  Who could it be?  Marty's got no prospects.  Even the girls at work take no interest in him or his coworker buddy Cameron. Still, every time he sees the gypsy, she insists he's more loved than he knows.


When Marty's beloved grandmother dies, Cameron is the only person from work who shows up at the funeral.  Marty tries to be a pillar for his mother and aunt, but all he wants to do is join his friend in the back row and cry in Cameron's arms.  Afterwards, Cameron takes care of him, feeding him homemade soup and being the best friend Marty could ever imagine.  Still, he doesn't see it coming when Cameron kisses him.  After all the time they've been close friends, is it really such a shock?

“She didn’t tell anyone she was sick.”  Marty set his soup spoon down.  His throat blazed, and he could feel his lower lips trembling.  “Nobody knew.  It didn’t show.  She seemed…”
The tears that had waited all day got their release, and Cameron leapt from his chair to launch himself at Marty.  Finally, someone to cling to!  Finally it was Marty’s turn to cry and be comforted.
When Cameron’s arms encompassed him fully, he latched on, clawing at the wool sweater his friend had changed in to after the funeral.  Marty was still wearing his dress pants and button-down shirt, and he suddenly felt suffocated by them.  He’d have torn them off if he didn’t think that might freak Cameron out.
“Hey, what’s with all the tears?” Cameron said gently, when Marty’s sobs had died down.  “What, are you trying to tell me my soup needs more salt, so you’re crying into it?”
Marty laughed.  He couldn’t help himself.  It was a stupid joke, the kind of thing his dad might say, but right now it was funny.  Cameron was bending awkwardly at his side, leaning one elbow on the table, and Marty arched up to hook his chin over his best friend’s shoulder.
He was about to say thank you when Cameron’s head turned.  It all seemed to happen in slow motion. Cameron’s face was so close to Marty’s—right there, really close—and then his lips… Cameron’s lips…

The anthology is now available from Evernight Publishing.  Look for it soon at other e-tailers.