New Release: The Beast In Me (Historical MFM Werewolf Menage)

Someti-i-i-imes it tries to kid me that it's just a teddy bear...

Do you know this song? 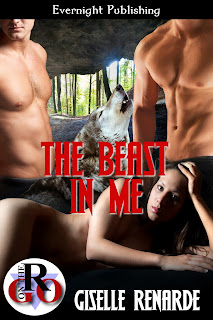 Sarah doesn't have much in common with the other girls in town. She's never even kissed a boy… until the evening Anderson walks her home. Over time, Anderson presses her for more than just kisses, and on the one-year anniversary of their first kiss Sarah might just give in to his whims. But the woods are dark at night, and there are creatures about, howling in the distance.

When Anderson is accosted by a wolf under the light of a full moon, will Sarah save her beau? Or will she be caught in the crossfire? And if she survives the attack, will life ever be the same?

Excerpt:
I remember the smell of autumn leaves, of dank and meat and fire.

I remember the smell of wet dog, and sneezing so hard my head rang like a church bell. The pain shot through me, all the way down to my toes. The damp had found its way into my bones. There was a soup of sorts, fed to me by unknown hands. I could see nothing.

Snow was the next smell, so fresh it drove out the dog scent almost completely.

When I awoke, there was a man standing over me. Behind him, two things: light so bright I wanted to clamp my eyes shut against it, and darkness so black it disappeared into oblivion. As I fixed my gaze on the dark shape in front of me, I realized the blackness was in fact the interior of a cave, and the whiteness was snow at its mouth.

It was wintertime. I knew little else, but I did know that.

My thoughts were a jumble of half-remembrances. Some might have been life, some dreams. I had a feeling I’d dreamed more than lived lately, especially when I realized I had on only a soiled slip under a great heap of blankets. Wherever I was, I’d been there for some time.

I wasn’t afraid of him, because I knew him. His voice was familiar to me.

“Would you like a drink of water?” he asked. He took a step forward and I saw his shirtsleeves rolled up to the elbow, dark wool trousers and suspenders. “I have meat broth warming on the fire.”

“What happened to me?” I squirmed under the pile of blankets, feeling soaked with sweat and goodness knows what else. “Why am I here?”

I felt like I knew the answers to those questions, but I needed some clarification. The man kneeled down beside me, and I felt a smile beam across my face as I realized who he was.

Get The Beast in Me now from Evernight Publishing: http://www.evernightpublishing.com/the-beast-in-me-by-giselle-renarde/

Also, can I ask a favour?  I'm trying to get this book 50 likes (or more) on Amazon.  If you've got a moment, could you click through and "like" it?

Posted by Giselle Renarde at 11:35 AM