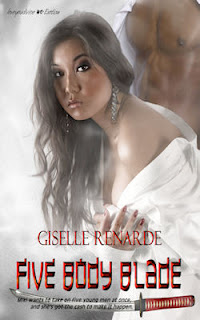 Since its initial publication, the story of sword collector Miki's aspiration to fuck five men at once has been... well, a bit of a dark horse.  Now that it's been included in my new group sex anthology, Kinksters, I'm hoping it'll come into its own.

Five Body Blade has a definite focus on money, but (unlike all the billionaire books on the market today) it's the heroine who's got fistfuls of cash.  Five Body Blade begins with Miki purchasing the sword of her dreams at auction, then buying her toy boy Theo a fine meal.  She's got money to spare, and she kind of can't see beyond it.  Money solves all the world's problems.  In fact, when Theo is upset by the fact that she wants to pay five college boys (including Theo) to enact her fantasy of getting gang-banged in a sex swing, she can't fathom why he'd feel hurt.  After all, she's paying him so much money to do it!

Miki is a really awkward character.  She wants to be liked by this group of young black men, but she commands such high respect that her "five bodies" don't know quite how to interact with her.  They are split along gender lines (Miki is a woman, they are men), racial lines (Miki is Asian, they are black), economic lines (Miki is a billionaire, they are students), age lines (Miki is older, they are younger) to the point where all these guys can see is difference.  Miki, on the other hand, views people more as assets than individuals.  Sometimes you really want to smack her.  She knows what she wants and she gets it, but at what cost?

“All right then, boys,” Miki called to the line-up.  “I hope you’re all good and hard because I’m choosing based on size and shape.  Jacquan!  You wanted to be in my ass?”
“Hell, yeah!” he cheered.
“And so you shall.  You’ve got the smallest cock of the bunch—perfect for rear entry.”
“Oh!” the guys teased.  “You’ve been told, man!”
“Darien,” she continued, taking his meat in her hand.  He breathed hard as she rubbed it.  “I like this curve; it reminds me of my sword.  And you’re wonderfully large.  I want this in my pussy.”
Lewis patted him on the back. “You’re good for something after all!”
“That leaves you and Ajay at my sides,” Miki said to Lewis.
Their faces fell simultaneously.
“Don’t be downhearted,” she said.  “You have perfect cocks for the task: they’re both long and straight, so when you come it will be on me and not my antiques.  At any rate, I give a decent enough hand job.”
“Good to hear,” Ajay said with a smile.
Rushing over to the low table, Jaquan looked up at Darien with alarm.  “Shit, man, I just realized your balls are going to be touching my balls!”
“Get a grip,” Lewis said.  “I’ve seen you two touch each others’ balls a hundred times.”
“Yeah, just like you’ve been sucking Ajay’s cock in the shower,” Darien shot back.  “We all know about you two.”
“Hey.” Ajay gave Darien a playful slap on the ass.  “How’d I get caught up in this?  I’m just standing here minding my own business.”
“All right, now,” Miki gently intervened.  Untying her halter dress, she let the loose fabric fall to the floor.  She was naked but for her stiletto heels, her body slim and pale but for the neat triangle of black hair.  Her breasts were small but proportional, with nipples so hard they could take someone’s eyes out.  It would take two Mikis to fill out one of Darien’s T-shirts.  Would she like him better than boring, lanky Theo?
“Let’s all get into position,” she commanded with feather-lightness.  “Darien, I want your thighs on top of Jaquan’s.  That’ll put you higher up.  I can take far more cock in my pussy than in my ass.  Sorry, Jacquan.”

So that's a taste of Miki.  She's trying.

You can read Five Body Blade today as an ebook, or by picking up your very own copy of Kinksters.

Posted by Giselle Renarde at 4:02 PM