The Kink in Kinksters: Beneath the Ice 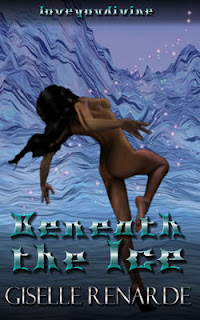 My group sex anthology "Kinksters" isn't just full of fetish sex-writing in the contemporary erotica tradition.  It's got plenty of that, of course, but you'll also find few paranormal stories in the collection.

In addition to appearing in Kinksters, "Beneath the Ice" is available as an ebook.


The sea monster Kaloopalooit lives in the cracks of the ocean ice, devouring the children of the Arctic.

When Enooya bets her husband she's a better fisher than he, she sets off unperturbed to the fissures in the sea ice. After all, the Kaloopalooit is just an imaginary monster the elders created to scare kids. Soon enough, Enooya discovers just how real the Kaloopalooit is, when it pursues her, dragging her down into the icy waters. The sea monster is beautiful and horrible, shimmering and bizarre. In exchange for breath, it demands that Enooya secure children for its dinner. Enooya has a better idea: Why not sample the delicacy called woman?


The coil circled tighter around Enooya’s core as the faces of the monster gazed beseechingly, gallantly and broodingly, respectively. Those faces, frightening yet beyond beautiful, appealed to her.
Enooya had an idea.  “Have you ever tried woman?”
“Woman?”
“Woman?”
“What is Woman?”

“Woman is a delicacy where I come from,” Enooya said. “Woman is tangy and sweet, fleshy and filling. Woman is the highlight of the buffet.”
“I would like to try Woman,” the thin face decided, licking his lips with a thick, pointed tongue.
“Well, you’re in luck because there’s a plentiful supply right before your eyes.”
The Kaloopalooit looked off in all directions.
“I mean me!” Enooya cried in exasperation. Slow learners, these sea monsters.
The Kaloopalooit’s six eyes took on an air of consideration as their heads all bobbed in circles around Enooya.
“We would regret to destroy you,” said the noble one. “We have taken quite a liking to you.”
“I haven’t,” grunted the mean one.
“Yes he has,” the plump, patient one consoled.
“Destruction is not on the menu.  Eating a woman is not like eating food. It is done with great care and consideration.”
The monsters appeared puzzled.
“It’s like the kiss of life you gave me.”
“He gave you,” the nasty one clarified, with a nod in the noble head’s direction. “I would just as easily have let you die.”
“No he wouldn’t have,” said the kind one, shaking her head.
“It’s a kiss of life for the entire body,” Enooya went on.
The Kaloopalooit huddled out of earshot, whispering from one head to another. The mean one broke away, then returned begrudgingly to the conversation. There was a collective nod, though the nasty head’s was not as enthusiastic.
“We have agreed,” the noble one said. “We are very curious to taste Woman.”

***
Beneath the Ice and the Kinksters anthology are both published by loveyoudivine and available from many retailers, including Amazon:

Posted by Giselle Renarde at 1:23 AM