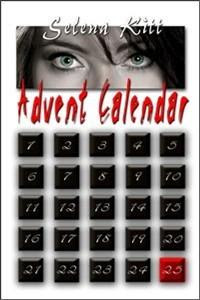 Title of Work: Advent Calendar
Author Name: Selena Kitt
Buy Link: http://excessica.com/store/catalog/product_info.php?manufacturers_id=14&products_id=494&osCsid=5ead8ad916f502f71fe1f17ad8501d31
Blurb: Jay is a player–a typical college student with one thing on his mind–and that doesn’t change when he meets Betsy. He wants nothing more than to take her five ways from Sunday, and Betsy doesn’t seem to object. Still, the more time he spends with her, the more she seems to affect him… When she gives him a homemade advent calendar for Christmas, Jay discovers the real meaning of the phrase, “Hell hath no fury like a woman scorned.” Note: This story originally appeared in the anthology Shivers.
Excerpt:
I let the dart go, and the board lit up in celebration. Ten. I win. I collected my prize, and wished the whole walk home that I'd listened to Tyler and taken the car, since I didn't even get the benefit of looking at her hard nipples in the cold with her jacket all zipped up and her arms crossed in front of her chest like that.

They sprang free in the apartment, though—no pretenses or cold drinks, guess we'd had enough of those. She dropped her coat near the door and pressed herself against me right there. Her lips were as cold as mine, but inside her mouth was warm and her tiny tongue probed against my teeth. She squealed when my cold hands abandoned the laces on her top and just pushed it down, bra and all, spilling her breasts into them.

God, she smells incredible! Whatever the hell perfume she was wearing was intoxicating, and I dipped my nose into the swell of her cleavage where it was stronger. "You smell great," I murmured against her neck. She giggled, and I winced. Note to self—don't make her giggle!

"Pheromones…" The feel of her breath in my ear made my cock jump.

"What?" I tilted my head to look at her.

"Never heard of pheromones? Just chemicals we give off…love scents. It's like an aphrodisiac. Careful, you could fall in love with me," she teased.

"You've got a love scent, alright," I agreed, kissing her, harder, digging for that tiny tongue again and finding it.

She moaned against my mouth, responding to my thumbs rubbing over her hard nipples. They were pale pink and puffy. She had a true blonde's coloring, and I judged that Miss Clairol only gave her natural hues a shine, although I wouldn't know that for sure until I had her panties down. Her hand went for my crotch, but I grabbed her wrist, twisting her arm behind her and kissing her toward my room. Whether it was the beer or the cold, my dick wasn't responding quite fully yet, and nothing killed things quicker than a girl who thought you couldn't get it up for her. No matter what you said, they made it all about them.

Her knees nearly buckled as I tongue-kissed her with both her hands behind her back, but she caught the shuffling backwards rhythm until I had her pressed against my bedroom door. I stopped there to enjoy the exposure of her breasts, the way her skirt was starting to ride up her thighs as she tried to press a knee up between my legs. Girls always forget about the testicles. I turned slightly, shifting so that my leg was pressed up towards the heat of her crotch, which is what she really wanted anyway, from the sound of her gasping as she rode it like one of the mechanical horses at the Toys R Us entrance, her skirt getting damper by the minute. Damn, this girl is hot!

I turned the doorknob, making sure I had her by the small of the back so we wouldn't spill onto the floor. We stumbled anyway, all the way to the bed, the height of the mattress forcing her to sit. She fumbled at my belt buckle in the dimness, and I pressed her away, unbuckling and starting to slip my belt out the loops.

"Mmmm, it smells good in here!"

I cocked my head, my belt hanging. I did smell something. It was weird how you got used to your own smells, and you never noticed it until someone else said something. "Vanilla!" She identified it—yep, that’s it alright. I wondered if Tyler's girlfriend had decided to force him into cookie-making or something this afternoon. The blonde's hand was tugging on my belt again, and I let her slip it the rest of the way out while I unsnapped and unzipped.

She leaned back on her elbows, watching me, her breasts flattening around the sides a little the way the larger ones do. She propped her stocking feet up on the bed—where the hell are her shoes?—and opened her thighs. In the light from the hallway, I could see the tops of her thigh-high stockings and, to my surprise, blonde fuzz. No panties in sight.

"They're in your jacket pocket," she purred, opening her thighs wider. "I took them off in the bathroom and thought, if you didn't take me home, at least I'd leave you a reminder." I realized I was still wearing my jacket. I reached in and felt dampness. Sure enough, there was a black pair of panties. I lifted them to my nose. She smelled incredible, strong, the way girls do when they still have pussy hair.

I had a sudden memory of Betsy's black panties shoved into her mouth, and my cock twitched. Goddamnit, man, you've got a half naked woman in front of you. Isn't that enough? I tried again to reason with him. Apparently not, because it was Betsy's ass I was picturing when I turned the blonde over and pushed her skirt up. It was Betsy's bald pussy I was missing when I starting eating her from behind like that, spreading her lips wide so that all I had in my mouth was smooth flesh. And it was the memory of Betsy that made my cock so uncomfortably stiff in my jeans that I had to slide them off.
http://excessica.com/store/catalog/product_info.php?manufacturers_id=14&products_id=494&osCsid=5ead8ad916f502f71fe1f17ad8501d31

In honor of the release of Baumgartner Generations: Henry, Selena is having an awesome giveaway!

Posted by Giselle Renarde at 10:04 AM