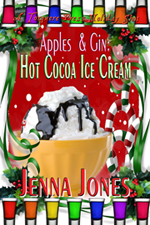 From Christmases apart to dealing with a relationship crisis to establishing their own traditions, Noah Kingston and Sawyer Shaw have celebrated the holidays a number of different ways. They've met each other's families and learned new facets of each other.

Noah and Sawyer have been through a lot to get where they are. One thing is certain: true love is delicious.

Excerpt: The sun had set while they were inside, and the moon was high in the clear, dark sky. Sawyer turned off all the lights in the house so there wouldn't be anything between them and the night, and Noah, after initially complaining that this was far too cold to be the desert, fell silent as he looked up at the stars.

Noah said quietly, "It's been a long time since I've been this far away from civilization."

"It's so easy to forget about all those stars. How dark real darkness is, but how bright the night sky can be." Noah was quiet. "Sometimes I see something like this, something just vast, and I think I could photograph this until the day I died and I'd still never capture how amazing it is." He turned his head, still resting on the edge of the hot tub, to look at Sawyer. "Sometimes I feel so small, kid."

Sawyer smiled and said, "Maybe it is." It was a common exchange between them, and sometimes Noah was even right.

Sawyer moved closer so that he could lean against Noah's shoulder. Noah wrapped an arm around him and kissed his forehead, and rubbed his arm to warm him. "You weren't supposed to change my life. You were supposed to be just another client, not this gorgeous kid with a big heart and talent to match."

"So we are talking about our feelings."

"Just a little. I feel you are the best thing that's happened to me in a long time, and I feel happy about it."

"I feel pleased that you feel happy," Sawyer said. "I also feel it's high time there's some lovin' up in here, because I feel a little sexy." He moved to straddle Noah's thighs and took his face in both hands.

"I feel," Noah breathed, "you are absolutely right," and held Sawyer's waist as they kissed.

Posted by Giselle Renarde at 1:20 AM