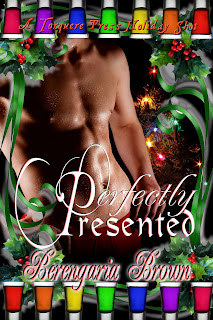 “Perfectly Presented” Blurb:
Blake and Xavier met a year ago at a business conference and had a
passionate one-night stand. They have remained fuck buddies but
neither has been willing to admit that they want a much wider, deeper,
ongoing relationship.
Until Blake sees Xavier agonizing over the fact that several gift tags
for poor children remained unclaimed on the holiday tree. Blake
encourages Xavier to talk about his past. They spend several days
together in the lead up to the holidays and come to acknowledge their
relationship is so much more than just hot sex. But can Blake get
Xavier to tell him about his past and his problem? Can they move from
being just fuckbuddies to a real relationship?

Excerpt:
Xavier unfolded his legs, stretched them out, and rested his feet on
Blake's thighs.
Blake put his arms along the side of the tub, uncrossed his own legs
and settled them onto the base of the tub, underneath and inside
Xavier's legs.
The two men looked at each other and level of steaminess in the small
room increased exponentially. Lust exploded between them. Their eyes
caught and held each other, while Blake pushed his right foot against
Xavier's balls. He let his toes wiggle up and down, gently massaging
and scraping the balls. Then he slid his foot down a bit so it would
rub against Xavier's ass, again wiggling his toes to send both their
pulses fluttering and both their hearts pounding with sexual tension.
Xavier copied him, sliding a foot into the dark curls at the base of
Blake's cock, and running his toes through the hair there -- backward
and forward, backward and forward, slowly and steadily, firmly enough
to raise goose bumps but not hard enough to promise a climax.
"Do you think it's possible to jack someone off just using your feet?"
gasped Blake.
"Dunno, but we could certainly try."
Toes moved more purposefully on cocks and breathing hitched in both men.
Suddenly Blake pushed Xavier's feet aside. "Nah I need to hold you. I
need more body contact." Suiting action to words he stood up splashily
and hauled Xavier to his feet too, sending water rolling up against
the sides of the tub.
Both men quickly stepped out of the tub, and Blake dropped to the
floor, sitting on a fluffy towel. He pulled Xavier onto his lap and
into his arms, wrapping both arms around the man and pulling him tight
to his chest.
Xavier responded by gripping Blake's thighs with his legs and digging
his calves and heels into the other man's back so they were held
tightly together.
Xavier grabbed both cocks in one hand and rolled and twisted them
against each other, using his palms to increase the pressure on them
equally, then sliding his hands up and down while still keeping the
two cocks pressed together.
"Fuck that's hot."
Blake loosened his arms just a fraction so Xavier could get a bit more
leverage, and thrust up with his hips to keep the penises side by
side.
Up and down went Xavier's hands, gripping and twisting, squeezing and
pulling, always ensuring the effect was heightened by both cocks being
entwined.
Blake was thrusting his hips harder now, and lowered his arms so they
gripped Xavier's hips. Holding and massaging his sides and hips, then
his ass. "Love your ass," he whispered placing a kiss on Xavier's
forehead,
"Love you," replied Xavier, squeezing both cocks hard.
At those words Blake exploded, semen jetting from his cock into the
air and over both their chests. Xavier stroked up and down once more
but there was no need, his own dick was already spurting its seed in
response to seeing his partner come.
Simultaneously both men leaned forward to kiss the other. "Well, damn.
Now we really need a bath," joked Blake.