Festive Frenzy: The Best Kind of Prize by DC Juris 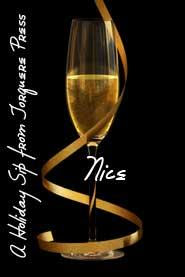 "The best kind of prize is a surprise," so says Willy Wonka, and Alan agrees! He takes the reins on planning their secret holiday getaway, but Jack isn't overly thrilled with being kept in the dark about their destination. Unbeknownst to Alan, Jack has plans of his own - plans to ask for Alan's hand in marriage. When an argument and Alan's disappearance get in the way of Jack's romantic intentions, is their holiday ruined, or can Alan make things up to Jack in time to still have a Merry Christmas?

Alan stood and moved around the small kitchen, his feet making little slapping sounds on the wood floor. Jack smiled as Alan bent over to retrieve a napkin, his pants tightening around his scrumptiously round ass. Holy. Shit. Jack's cock rose to attention immediately. "Care for a shower to warm up?"

Alan grinned. "Hmm, let me think about it. Do I want to get soapy and steamy with you? I guess I could be convinced."

"I'll get the water ready." Jack stood and went down the hall to the bathroom and turned on the hot water, knowing it needed time to really get up to the nearly bone-melting temperature he and Alan both preferred. He unbuttoned his jeans and slid them and his boxes off, stepping out of them as he pulled his shirt off over his head.

"Damn! I never get tired of that sexy body of yours," Alan told him, entering the bathroom.

"C'mere, baby." Jack pulled Alan close and locked their mouths in a deep kiss, reaching under the waistband of Alan's pants to grip his cock.

Alan's head fell back with a moan as he thrust his hips forward.

Posted by Giselle Renarde at 7:02 PM