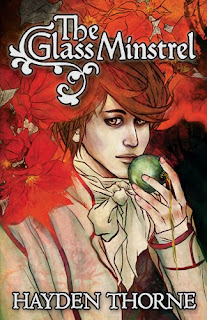 Blurb:
The Christmas season in mid-19th century Bavaria is brought to life in the The Glass Minstrel, a new, original historical novel from acclaimed author Hayden Thorne.

Two fathers, Abelard Bauer and Andreas Schifffer, are brought together through the tragic deaths of their eldest sons. Bauer, a brilliant toymaker, fashions glass Christmas ornaments and his latest creation is a minstrel with a secret molded into its features. When Schiffer sees Bauer's minstrel ornament in the toy shop, he realizes that Bauer is struggling to keep his son's memory alive through his craft. At first he tries to fault him for this, but then recognizes that he, too, is seeking solace and healing by reading his son's diary, a journal that reveals, in both painful as well as beautiful detail, the true nature of his relationship with the artisan's son.

In addition to the story of the two fathers, a third character is central to the plot: fifteen-year-old Jakob Diederich. The young man is burdened with his own secret; he develops an obsession with a traveling Englishman who stays at the inn where Jakob works. The lives of all three men intersect during the holiday as Schiffer tries to focus on his family in the present; Bauer struggles to reconcile his past and Jakob copes with an uncertain future. The lyrical prose and rich period detail will keep the reader engrossed from the very first page in this tale of redemption, hope, and haunting, but timeless, themes.

Excerpt:
The shop door’s bell rang loudly throughout the morning hours, and it was expected to ring some more until the end of the day. Visitors, momentarily escaping Zirndorf’s winter cold, marveled at the current offerings that filled a much-respected craftsman’s shelves to capacity. Cheeks reddened by the chill air, eyes brightened by the prospect of a wonderful celebration, thickly bundled men, women, and children lost themselves in a world of intricately-shaped and exquisitely-painted glass as they inspected the merchandise.

It was one of the annual draws for the locals of the small town known for its toy making industry—Abelard Bauer’s shop offering glass ornaments alongside the toys and clocks that filled the shelves throughout the year. Bauer was well-known for his skill in remarkably detailed woodcraft as well as his skill for acquiring magnificent clocks and larger toys from artisans up and down the Bavarian Alps region, but for Christmas, he was legendary for his little glass creations. He’d admitted to making a relatively small number all year long, for it was a tedious process for him with his eye for precision and perfection, and he needed all of the twelve months he could have. That he also worked on his regular offerings of equally beautiful toys made his schedule more demanding. In the end, however, it was all worth the sweat and tears.

“Incredible!” some visitors cried as they held up an ornament or two.

“Absolutely darling!” others said as they turned the little figurines carefully, watching the way the details captured and reflected the golden glow of candlelight.

“Exquisite! Perfect!” was the consensus, and princesses, nightingales, soldiers, and countless others were whisked quickly to the young assistant. At the counter they were assessed, priced, and carefully wrapped up in delicate paper before vanishing out the door and into the snow that peppered the air beyond with so much seasonal cheer.

“You’ve outdone yourself this time, Bauer,” exclaimed a tall, broad gentleman with a most impressive set of curly red whiskers, which were also dusted with snow. He squinted through his spectacles at an exquisite saint, his thick fingers gentle in their handling. “By God, what remarkable skill!”

The little shop’s proprietor smiled and bowed. Standing next to the impressive-looking fellow, Abelard Bauer appeared to be no less like his own glass creations—small, thin, delicate, as though he were to shatter into a thousand fragments at the slightest touch. He clasped his hands behind him as he sought to answer his customer’s questions and entice him further with this year’s crop of designs.

“You’re most kind, Herr Professor,” he said, his voice its usual calming hum. He wrung his hands as they rested against his back till they felt a little raw.

“My daughters will love these,” the gentleman said as he moved from one shelf to another and from one container to another, pulling figurines from where they rested as he went, peering through his spectacles and inspecting each piece with the care and fastidiousness of a supreme connoisseur.

Bauer shadowed him at a discreet distance, taking the chosen pieces, hurrying to the counter where he set them down, and then hurrying back to the gentleman’s side. He gave other customers a welcoming smile and directed them to his assistant, who looked after their needs while he paid all his attention to the red-whiskered Dr. Naumann, his oldest, most loyal, and most generous customer.

They presently stopped at the farthest wall of the shop. The professor paused in his endless praise as he regarded a basket that sat on a corner table. Bauer watched him, his fingers knotting around each other at his back. They ached now, the rawness and heat from his nervous wringing taking their toll. A slight, sinking feeling overcame him until it seemed as though his stomach had completely fallen. It was a familiar sensation, in truth, and he hoped that it would vanish soon, for he’d grown quite sick of it.

Dr. Naumann reached into the basket and gently moved some glass figurines aside. An air of gravity descended on him as he paused, his head bent as though he were shocked speechless.

“Bauer,” he said, his voice dropping, and he pulled out a glass ornament. “Why did you do this?”

“I have my reasons,” Bauer replied, surprising himself with the steadiness of his voice. “Forgive me, Herr Professor, if I don’t satisfy you with a defense.”

“It’s unnatural. I see no reason why a man of your genius would stoop to—this.” The professor’s voice grew hard, but he didn’t spare Bauer a glance. All his attention was firmly fixed on the figurine that he was inspecting, and he didn’t see the way Bauer’s face twisted in a bitter grimace. It lasted a mere half-second, no more, but the pain that spawned it was deep.

“I beg your pardon? Unnatural?”

“Very well. I chose the wrong words,” Dr. Naumann sighed, his voice softening. “Forgive me. I didn’t mean to offend you. It’s your health I’m thinking of. God knows, sir—you’ve suffered enough.” He paused, hesitating. “You forgot about your illness already? When people talked about you, how you—you failed—as a father? How your son—”

“Thank you for your concern, but I’m not some fragile little thing that will break at the smallest criticism or judgment thrown at me by those who know nothing. And no—no one, not even you, Herr Professor, knows anything about me or my family.”

That impatient return earned Bauer a derisive little snort, but Dr. Naumann continued to avoid looking at him. “There are certain things that are best kept secret, my friend. Even if you created this—this thing—out of love and respect for your son, you’re better served destroying it, if you don’t mind my saying. As it stands, you’re merely breaking old wounds open and subjecting yourself to humiliation all over again, even if only in memory.” Dr. Naumann met Bauer’s gaze, finally. “You can’t bring the boy back with this.”

“It’s well that I choose to sell it, then,” Bauer retorted.

“Oh? Why? So the taint of a scandal would remain alive in a stranger’s tree?”

Bauer, losing even more patience, sighed and stepped forward, snatching the ornament from Dr. Naumann’s hand. “I thank you again for your interest and your concern, Herr Professor, but as I’ve said, I’ve my own reasons, which I choose to keep to myself. It’s not my intention to disgrace anyone’s tree with my past.” His breathing had grown a little ragged. “And I’m not openly soliciting sermons about my son’s nature. Yes, nature, Herr Professor, for that was what made the boy behave the way he did. Nature.” Bauer paused to draw a hand across his brows, wiping the thin cover of sweat that had dampened his forehead. “He was neither taught nor corrupted—”

Dr. Naumann, whose complexion had turned as red as his whiskers, raised a hand, his eyes sweeping the surrounding area as he let out an awkward little chuckle. “Now, now, friend,” he said, “there’s no need to be so excited. I was merely wondering—”

“You, sir, were casting judgments on a situation you know nothing about.” Bauer swallowed. “Casting judgments on the character of my son, whom you don’t understand. I won’t have you blacken his memory. This is a shop, Herr Professor, and I’m here to help you find what you need for your children. That’s all.”

Dr. Naumann turned around at last and leveled Bauer with a look of concern, irritation, and sympathy. “As you say, my good man. I won’t press you any longer, but know that I give you my opinions out of respect for you and your good name.”

“Thank you, but I’d prefer it if you didn’t give your opinions at my son’s expense.”

The professor’s complexion turned even redder, but he refrained from arguing and merely inclined his head. “Of course. Forgive me,” he said, his voice brittle. “As I said, I simply speak as your friend.”
Buy link: http://www.amazon.com/dp/0982826710
Publisher links: (print) http://cheyennepublishing.com/books/minstrel.html
(eBook) http://bcpinepress.com/catalogDetail.php?bookCode=0038
Posted by Giselle Renarde at 11:16 AM