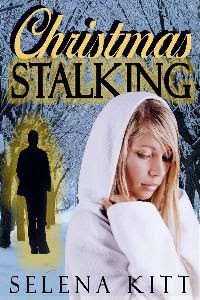 Blurb:
Alone and on the run, Ginny is desperate to stay one step ahead of danger while still trying to protect her sister and her sister's boys. Forced from her home and holding the key to a horrible secret, Ginny is haunted by her memories and pursued by a man who will stop at nothing to regain his control over her. The appearance of a mysterious man in her time of greatest need forces Ginny to decide whether she will take the chance to trust this handsome stranger.

She woke up floating on a cloud, her body aching but resting on something so soft it was unimaginable. Her eyes focused and she realized she must be in someone’s home. She was lying on a sofa and there was a television, a coffee table, all the usual living room amenities, along with a Christmas tree in the corner and one stocking hung on the fireplace mantle. She could hear someone talking and, for a moment, couldn’t remember anything that had happened.

“Yeah, I have her here now. I’m gonna see if I can get her to come in without any hassle,” he was saying.

She scanned the room for her backpack and coat and found them in a corner. The world slipped a little as she stood. Steadying herself on the arm of a chair, she moved toward her things. She had to get out of here before Patrick showed up.

The stranger had moved further into the kitchen and his voice was muffled now. She strained to hear. Was he calling more cops? Worse, was he calling Patrick? She shivered, sure it was the latter as she shrugged on her coat and shouldered her backpack, easing toward the front door.

She heard him call out as she turned the knob. She pulled, but found the deadbolt locked.

He caught up to her in three quick strides, and as she unlocked the deadbolt and pulled open the door, he pressed his hand flat against it and shut it again. “Where do you think you’re going?”

She moved around him, starting toward the kitchen. “Anywhere but here!”

“Listen, you have to stay.” He caught up to her again, moving in front of her and blocking the entryway with his body.

“Like hell I do!” She shoved at him, but it was like trying to move a brick wall, and her head and mouth throbbed with the effort. “What for? So you and Patrick can finish what those two started? I don’t think so, asshole! Now get out of my way!”

“Patrick? Who the hell is Patrick?” The genuine look of confusion on his face stopped her for a moment.

“Do they give you acting lessons in private dick school?” she snarled, turning away from him and running toward the front door.

“We can’t keep doing this running thing all night.” Exasperated, he caught up with her again, stepping in front of the door before she could reach it.

She swallowed hard, her throat burning, her voice shaking. “If you had any idea what I was running from, you never would’ve told him where I am. Now get out of my way, before I call the real cops!” She ducked under his arm, pulling at the door, but was no match for the weight of him pressed against it.

“Listen to me!” He grabbed her arms and pulled her toward him. “I’m trying to help you. That’s all I want to do!”

“If you want to help, then let me go,” she pleaded. “Please, whatever he’s told you, none of it is true. You can’t let him find me. I’m begging you.”

The tears were coming and she couldn’t stop them, although she tried hard. She even bit down on her bruised and swollen lip, hoping the pain might be a distraction.

He shook his head at her. “Who? What are you talking about?”

“Oh, come on, you know who!” She pulled away from him and ran, she didn’t care anymore where to. “The guy you were just talking to on the phone!”

This time when he reached her, he enfolded her, wrapping his arms around her from behind, grabbing her wrists and crossing them over. He held her that way for some time, not speaking, just waiting for her to stop struggling. When her breath began to slow a little and she relaxed against his bulk, he spoke, “I’m going to tell you something, and I want you to listen. Then I’m going to ask you a question, and you’re going to answer me. Do you understand?”

He waited for her to nod, which she did reluctantly, before going on.

“My name is Nick Santos. I’m a real cop, not a private detective. The phone call was to the station about the assault I’d just witnessed. Did you see my badge? I assure you it’s quite real. You can call them back to check it out if you want to.”

She relaxed a little at these words, not sure what to believe.

Posted by Giselle Renarde at 11:02 AM