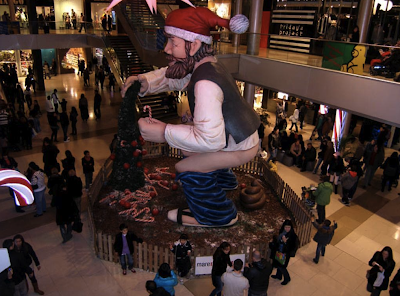 If you live anywhere near Catalonia, Spain, you might already be familiar with this happy fellow. He's Caganer, one of the region's traditional Christmas statues. And no, you're not seeing things. He really is taking a giant crap in the middle of the mall. Too many candy canes, I guess, or...what are those, apples?
Why build a giant pooping elf in the middle of your shopping mall? Well...if Wikipedia doesn't know, then neither do I. But, according to Wiki:

In Catalonia, as well as in Spain and in most of Italy and Southern France, traditional Christmas decorations consist of a large model of the city of Bethlehem, similar to the Nativity scenes of the English-speaking world but encompassing the entire city rather than just the typical manger scene. The caganer ... is often tucked away in a corner of the model, typically nowhere near the manger scene.

Possible reasons for placing a man who is in the act of excreting waste in a scene which is widely considered holy include:

The exact origin of the Caganer is lost, but the tradition has existed since the 17th century.

So, there we go. We've all (sort of?) learned something new and can consider ourselves that much smarter. Not as smart as Einstein, of course, and if you shop at http://www.caganer.com you already know that he poops too. Hey, everybody does it! 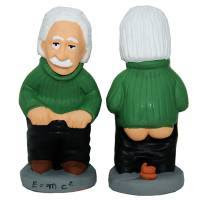 Posted by Giselle Renarde at 11:13 PM